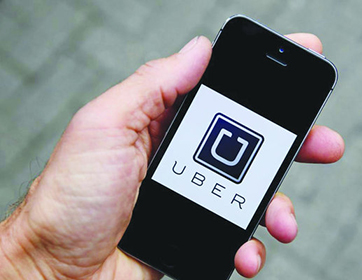 The move marks a further retreat from international operations for Uber, after it sold its China business to local rival Didi Chuxing.

Both firms describe the deal as a win for their passengers, but analysts warn it could mean higher prices.

Grab is South East Asia's most popular ride-sharing firm with millions of users across eight countries.

Under the terms of the deal, Uber will take a 27.5% stake in Singapore-based Grab. Uber's chief executive, Dara Khosrowshahi, will also join Grab's board.

The value of the deal has not been made public.

Grab's chief executive Anthony Tan said the deal "marks the beginning of a new era" in which the merged business would be better placed to serve customers.

Uber's Mr Khosrowshahi said the deal would "help us double down on our plans for growth as we invest heavily in our products and technology".

The deal marks Uber's third retreat after it withdrew from China in 2016 and sold its Russia business to local firm Yandex last year.

Mr Khosrowshahi has been preparing the firm for an initial public offering in 2019.

Uber invested $700m in its Southeast Asia business and another $2bn in China before it sold its operations there.

In November, Mr Khosrowshahi, said the company's Asian operations were not going to be "profitable any time soon".

Uber is keen to push the message that this isn't a retreat from South East Asia - that instead, this is a merger of equals - a partnership of sorts.

But while it's true that Uber does get a sizeable stake in Grab, it is hard to ignore that this is the third market it is pulling out of. First China, then Russia - now South East Asia.

Look closely at the internal email that Uber chief executive Dara Khosrowshahi sent his staff announcing the deal, and you can see a hint of an acknowledgement that perhaps their global strategy of barging into overseas markets isn't going as well as Uber had planned.

"One of the potential dangers of our global strategy," he writes, "Is that we take on too many battles across too many fronts with too many competitors."

This deal does beg the question what does Uber do next in Asia - because it is only really Japan, South Korea and India that it now operates in - and in all of those markets, it is facing competition of some sort, home grown or otherwise.

If this defeat at Grab's hands is anything to go by - Uber best be prepared for a tough battle ahead.

Last year, Uber lost $4.5bn (£3.2bn) - and its chief executive - as it underwent a fundamental shake-up following a harassment scandal.

But some fear that its withdrawal from South East Asia could result in higher prices for users there.

Competition in the ride-hailing sector has been fierce, resulting in discounts and promotions offered to riders and drivers reducing profit margins.

But consolidation in the industry was widely expected after Japan's Softbank Group made a large investment in Uber last year.

SoftBank is a major investor in several of Uber's rivals including Grab, China's Didi Chuxing and India's Ola.

It is believed to have pushed for consolidation in order to improve revenues.

The deal - which is yet to be approved by local regulators - includes the sale of all of Uber's operations in the region, including its key food delivery service Uber Eats.

As a result of the merger, the GrabFood service will expand from two to four South East Asian countries by next quarter, Grab said.

The company said the deal would help it move towards profitability, and would also help to increase "adoption of the GrabPay mobile wallet and support Grab's growing Financial Services platform".