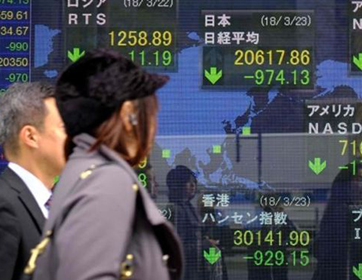 China responded to news of the planned tariffs by saying that while it did not want a trade war, it was "absolutely not afraid" of one.

Mr Trump's proposed tariffs are a response to allegations of intellectual property theft by China.

The US launched a complaint against China at the World Trade Organization (WTO) on Friday.

Its statement said: "China appears to be breaking WTO rules by denying foreign patent holders, including US companies, basic patent rights to stop a Chinese entity from using the technology after a licensing contract ends."

"China also appears to be breaking WTO rules by imposing mandatory adverse contract terms that discriminate against and are less favourable for imported foreign technology."

Beijing said it firmly opposed the planned tariffs but China's ministry of commerce said it was "confident and capable of meeting any challenge".

"China will not sit idly by its own legitimate rights and interests. We are fully prepared to defend our legitimate interests," the ministry said.

But it said it hoped the US would not drag bilateral economic and trade relations into danger.

"Equity markets have sold-off heavily this morning as investors are fearful we are entering a trade war," said David Maddon, market analyst at CMC Markets UK.

"Traders don't like the look of the political landscape, and they are seeking safe-haven assets."

Earlier on Friday, China announced its own set of proposed tariffs worth $3bn. Beijing said these were in response to US tariffs on steel and aluminium imports announced by Mr Trump earlier this month.

The US tariffs on steel and aluminium imports come into effect this week.

Why is the US taking tariff action?

The US imports billions more goods from China each year than it exports, creating a deficit of about $375bn last year - a figures which Mr Trump has railed against.

The president said on Thursday he had asked China to cut that deficit by $100bn "immediately".

Last August, Mr Trump ordered an investigation into Chinese policies and his proposed tariffs reflect the outcome of that probe.