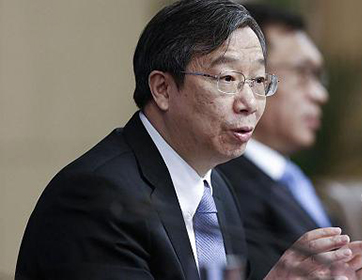 In his first public speech since becoming central bank chief last week, Yi Gang told the China Development Forum in Beijing that opening up leads to progress, while closure points to backwardness.

"History has proved that areas that are more open are more competitive, and areas that are less open are less competitive and see risks accumulating (as a result)," Yi said in a wide-ranging speech that touched on issues from support for rural communities to potential risks in the financial system.

U.S.-educated Yi, 60, a protege of respected predecessor Zhou Xiaochuan, is widely seen as a safe pair of hands, ensuring policy continuity as China persists with its crackdown on risks and a debt build-up in its increasingly complex financial system.

While Yi is not regarded a political heavyweight like his former boss Zhou, he is expected to play a supporting but important role on China's new economic team helmed by Vice Premier Liu He.

Yi's speech put much emphasis on risk control, and was in line with the government's narrative that China's opening up will proceed but at a pace it sets.

Commerce Minister Zhong Shan, in a recent meeting with former U.S. Treasury Secretary Henry Paulson, said China's opening is self-initiated and will not be pressured by any "big stick" from other countries.