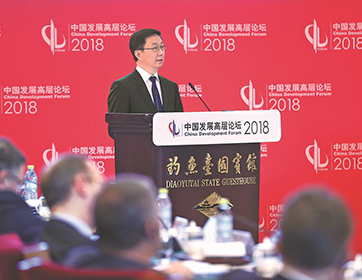 Vice-Premier Han Zheng called for trade liberalization and investment assistance to ensure sound growth of economic globalization and to make it open, inclusive, balanced and beneficial to all countries.

He reiterated China's stance on free trade at the opening of the annual China Development Forum on Sunday.

Han and Vice-Premier Liu He both voiced concerns about trade protectionism over the weekend, after US President Donald Trump signed a memorandum on Thursday for a plan that could impose tariffs on up to $60 billion of imports from China. Chinese investment in the US also was targeted.

Han, also a member of the Standing Committee of the Political Bureau of the Communist Party of China Central Committee, said it's a dead end for those who resort to trade protectionism to solve problems arising from economic globalization. Unilateralism and trade wars benefit no one, but lead to a larger-scale conflict and negative impact, he said.

The vice-premier said history has demonstrated that openness will lead to prosperity. China will further open-up to achieve high-quality development, focusing on the Belt and Road Initiative and equally treating domestic and foreign enterprises, he said.

All market entities can take the opportunity to grow quickly and countries around the world can work with China to realize mutual benefit and win-win cooperation, Han said.

Trump's memorandum is based on an investigation under Section 301 of the Trade Act of 1974 into alleged Chinese intellectual property protection and technology transfer practices.

Liu, who heads the Chinese side in the China-US Comprehensive Economic Dialogue, said in a phone call on Saturday with US Treasury Secretary Steven Mnuchin that the US move violates international trade rules and hurts the interests of China, the United States and the international community.

Liu said China is prepared to safeguard its national interests. Both countries should remain rational and make efforts to stabilize bilateral economic and trading ties, he said. Both sides agreed to maintain communications.

China's economy contributes more than 30 percent to global economic growth. Its economic development in the past four decades has been established with the spirit, ingenuity and hard work of the Chinese people, combined with the reform of the economy and opening to foreign ideas and investment, Tim Cook, chief executive of Apple Inc, said at the opening ceremony.

Trade protection measures adopted by some countries in the past three months go against the principles of the rule-based global trading system, said Li Wei, head of the Development Research Center of the State Council, which sponsored the forum.

It is not in anybody's interest to have an escalating trade war, said Robert Moritz, global chairman of PricewaterhouseCoopers LLP.

Moritz said the global economy would be fragile if trade tensions come together with other risks.

"While it (protectionism) is in discussions between the US and China right now, it clearly has the risk of being more inclusive in terms of other countries being involved," he said.

The US needs China and China needs the US, and the world needs both, he said. There is opportunity for both countries to share the stage of the world because neither one of them can do as much as they collectively can do, he said.

Li Xiang contributed to this story.